This work aims to identify changes and trends that favor the students' learning style and autonomy, through a qualitative evaluation of the social representation of students in the development of individual and group activities. Questionnaire application and interviews were carried out at both the Pontifical Catholic University of Goiás (PUC Goiás) and the Federal University of Goiás (UFG). The questionnaire is based on a 7-point Likert scale, which evaluates 13 items in four dimensions. After answering, each item is analyzed by the k-means clustering method, which groups the data unsupervised according to the levels of similarity of each item. With the result, we can point out what are the aspects that determine the skills and psychosocial profile of students, from this, it will be possible to make changes in the methodology applied to benefit the learning process of students, favoring multidisciplinary skills, the courage to face the students. challenges creatively, the ease of adapting to change, working as a team, valuing and understanding one's point of view - with commitment and ethics.

Prof. Leonardo Guedes has been for 5 years the President of Goiás´ State Research Support Foudantion, and for 2 years the President of Brazilian Association of Electrical Engineers - Goiás´ State Section and Professor and researcher at both Federal University of Goiás and Pontifical Catholic University of Goiás. He is also fellow at University of Brasília (UnB) and Universidad de Salamanca (USAL/Spain). Prof. Leonardo Guedes has been Director of AROEIRA Foundation at Catholic University of Goiás and also spent two years as a Council Member of the FUNAPE Research Support Foundation at Federal University of Goiás. Prof. Guedes also serves as a Vice-President of the CREA (State Board of Engineering) and as a member of the CNCEEE (National Committee of Electrical Engineering Chambers) as he is currently the Chairman of the Goiás State Electrical Engineering Chamber. Prof. Leonardo Guedes is an Electrical Engineer with more than 10 years' experience in engineering research and development that were gained in major Brazilian research centers. In 1993 he received a Grant from Conselho Nacional de Pequisa - CNPq (National Research Council) for graduate (MSc and PhD) research in communications systems at the State University of Campinas – UNICAMP (São Paulo). In 1994 an additional Grant from the Development Research Centre of Brazilian Telecommunication Provider (CPqD-Telebrás) and in 1996 ans 1997 he received a Rotary International Grants to research, inspect and post-doctoral activities at Ryukoku University and some companies within Japan including Sharp Co., Mitsubishi Co. and Adogawa Electronics Co., among others. Prof. Leonardo Guedes co-founded the Instituto de Ciências e Tecnologia da Informação Ltd (ICTI) In 1998 aiming information technology research and system development. He has been involved with the Lexonet project for 5 years deploying his free time in working for commercial relations with Governamental Organizations, Regulation Agencies and Strategic Partners, besides a unique content database building. Prof. Leonardo Guedes received a BSc in Electrical Engineering from the Federal University of Goiás, and earned MSc and PhD degrees from UNICAMP. He was admitted to the Goiás State Board of Engineering in 1993, to the Institute of Electrical and Electronics Engineers in 1994 and to the Project Managment Institute in 2003. 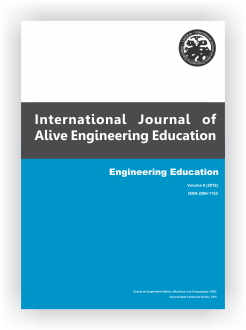 The author is responsible for the following statements by submitting an article electronically in the International Journal of Alive Engineering Education (IJAEEdu):

b) If the document in question contains material which does not hold the copyright, the author states have obtained the copyright holder’s permission to grant the Universidade Federal de Goiás (UFG) the rights required by this license, and that such material whose rights are third is clearly identified and acknowledged within the text or content of the document.

c) States that the study was conducted in accordance with the ethical standards of all applicable institutional, local, national and international guidelines.

d) It also states that any person appointed as author or co-author of the document is aware of it and agrees to be so appointed.

As responsible for the submission of the document, I authorize the School of Electrical, Mechanical and Computer Engineering of the Federal University of Goiás to provide the paper free of charge, through the Electronic System for Publishing Magazines UFG (SEER / UFG) or in printed form, without compensation of copyright, in accordance with Law No. 9610/98. Is allowed, reading, printing and / or download, as a promotion of the Brazilian scientific production. Any use of the work not authorized under this license or the copyright law is prohibited.

COPYRIGHT TRANSFER AGREEMENT AND LETTER TO THE EDITORS